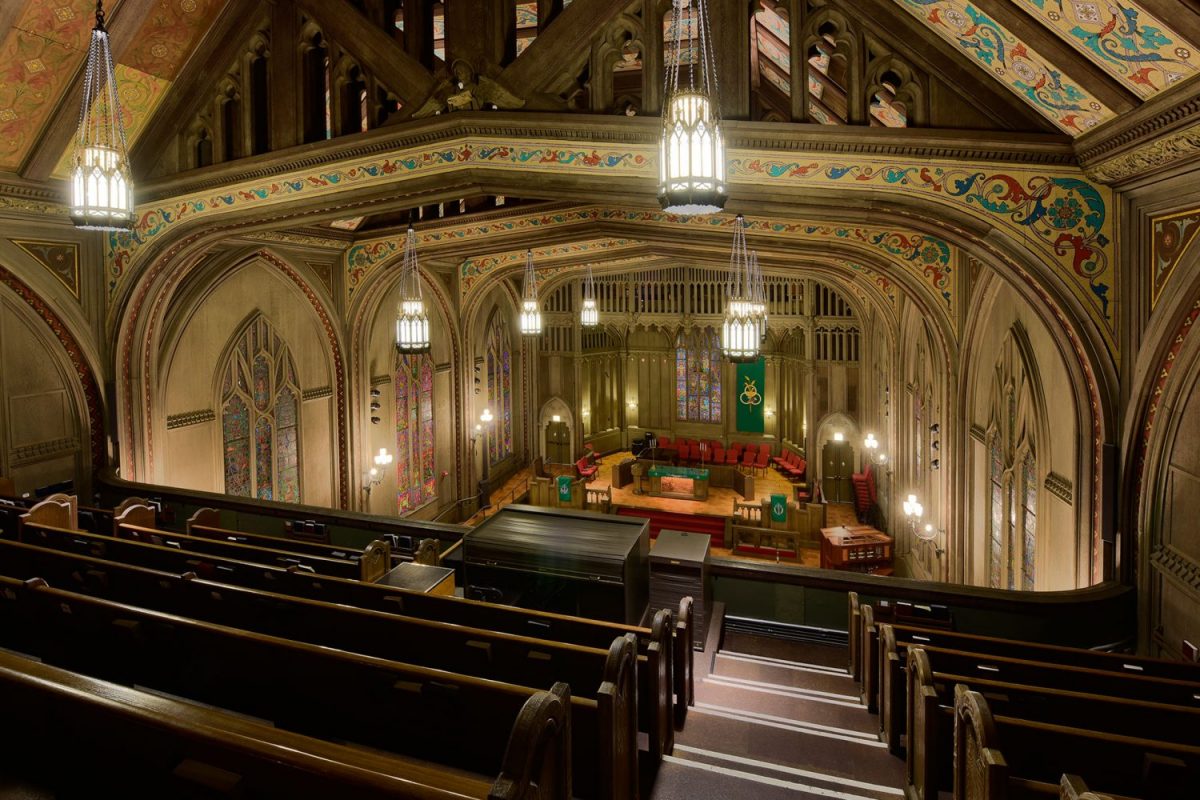 They say that people who are good at what they do make it look easy. What about people who are so good at what they do that nobody knows they’ve done anything at all? Such is the task of those in charge of historic building restoration and renovation projects. When the iconic and historic Chicago Temple Building at 77 W. Washington received its recent makeover, the team at Glenview Haus was tasked with building several new fire-rated doors that blended in with the surrounding architecture.

Located across from City Hall, the iconic Chicago Temple Building is home to the First United Methodist Church. This unique skyscraper church houses an expansive, 4-story chapel on the ground floor. Most of the rest of the building is dedicated to office space. When this early high rise was built back in 1924, it was the tallest building in Chicago. Flash forward nearly 100 years, and the building needed a little TLC.

As part of the complete building rehab, the church doors for the ground floor chapel needed to meet modern building code standards. The old doors were of a stunning neo-gothic design that perfectly fit the surrounding architecture of the church. But they didn’t meet modern fire code standards for commercial buildings.

Glenview Haus created new 90-minute fire rated replica doors that use modern technology but look exactly like the old ones. They did such flawless work that, at first, they were accused of not completing the job they were hired for.

Glenview Haus owner Greg Wozniak recalls the event with humor and pride, “Because this is an active church, we had to install these doors at night, so as not to disrupt the daily services and ceremonies. After we installed the first set of the doors, the general contractor called us the next morning to ask why we didn’t show up. He was so surprised to find out that we had done the job and that those were the new doors. That made me feel really good. The whole idea was to make them look old, to make them feel the way they were originally. And to me, that was mission accomplished.”

In historical renovation doors, the idea is to create doors that look as close as possible to the original ones while incorporating new technologies to improve their performance. The new doors can have better insulation and energy efficiency; use new, modern hardware; or abide by strict fire codes, as was the case with this project.

What does it take to achieve such flawless craftsmanship? For Wozniak, it’s both an art and a science. On the technical side, team members at Glenview Doors underwent a rigorous certification process to use a very specific, specialized technology for fire rated door cores.

The company is certified to build 20-minute, 60-minute, or 90-minute fire rated commercial doors and fire rated replica doors, depending on the building’s requirement. But the ability to build commercial fire rated doors is only one part of the puzzle. The rest Wozniak credits to the extremely skilled artisans in his employ.